Back to SM - Unbroken Bonds 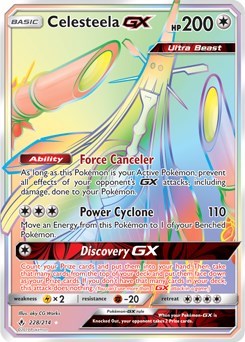 Card Number: 228/214
Rarity: Secret Rare
Card Type: Colorless
HP: 200
Stage: Basic
Card Text: Ability — Force Canceler
As long as this Pokemon is your Active Pokemon, prevent all effects of your opponent's GX attacks, including damage, done to your Pokemon.
Attack 1: [3] Power Cyclone (110)
Move an Energy from this Pokemon to 1 of your Benched Pokemon.
Attack 2: [1] Discovery GX
Count your Prize cards and put them them into your hand. Then, take that many cards from the top of your deck and put them face down as your Prize cards. If you don't have that many cards in your deck, this attack does nothing. (You can't use more than 1 GX attack in a game.)
Resistance: F-20
Retreat Cost: 4
Weakness: Lx2